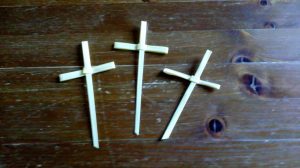 Christ walked a lonely path to the Cross.

Isaiah prophetically described Jesus: “He was despised and rejected by men, a man of sorrows and acquainted with grief” (Isaiah 53:3). We have little detail about Jesus’ early life but we do know how He began His ministry. When we began this journey of Lent we began in the solitude of the wilderness.(Matthew 4:1-11; Luke 4:1–13) Jesus is led by the spirit into the Judaean Desert

He takes with him to the garden, Peter and the two sons of Zebedee, James and John. He asks the three to watch with Him while He goes off a short distance to pray. He had revealed to his friends that His soul was “very sorrowful, even to death” (Matt. 26:38; Mark 14:34) before He asked them to be vigilant. When Jesus moves a short distance away, he falls to the ground to beg His Father to remove the cup of suffering and death before Him, if possible, adding, “Not my will but yours be done!” (Matt. 26:39; Mark 14:36; Luke 22:42).

Isolated from his disciples and from those who came to betray him and arrest him Son and the Father wrestle together in the darkness. But each time Jesus returns to his disciples he finds them asleep. Three of His closest friends slept during His time of greatest need, while another friend actively plotted against Him. Judas had been one of the Twelve, one of Jesus’ closest friends, who shared His meals, His life and yet had secretly been conspiring to have him arrested. Jesus’ lonely night was not over yet, however. Before the cock crowed to announce the morning, Peter would deny three times that he even knew Him.

Jesus endured the beatings, the betrayal of Judas, the desertion of the disciples, the humiliation of the crucifixion, being spat upon, the crown of thorns, the nails in His hands, the mocking. But all of these lead up to the Cross. The Cross is the loneliest place on earth. “My God! My God! Why have you forsaken me?” Jesus cries out (Mt 27: 46)

But even in Christ’s lonely and isolated death on the Cross Jesus reaches out with love and care to those around Him. John’s Gospel tells us that “Near the cross of Jesus stood his mother, his mother’s sister, Mary the wife of Clopas, and Mary Magdalene. When Jesus saw his mother there, and the disciple whom he loved standing nearby, he said to her, “Woman, here is your son,” and to the disciple, “Here is your mother.” From that time on, this disciple took her into his home.”

Vicar of St Mary Magdalene for the last 10 years and Priest in Charge of Christ Church Chatburn and St Leonard Downham for the last 4 years. Ask me about running then run away