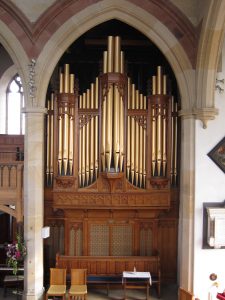 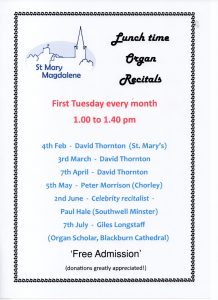 St Mary’s organ is one of the largest and finest in the Northwest. It was built in 1913 by J. J. Binns of Leeds. It originally had 3 manuals and pedals with 40 stops.

The organ occupies the space at the eastern end of the north aisle and rises to the full height behind fine oak casework with gilded pipes on both the chancel and gallery sides.

This organ was a fine example of an Edwardian Parish Church instrument and typical of the Binns workshop displaying high quality materials and construction.

The opening recital was given by Sir Edward Bairstow, organist of York Minster.

In 1961 the organ was considerably enlarged by Nicholson & Co. of Worcester; the Binns ‘Choir organ’ became the ‘Solo organ’ on a 4th manual and a new ‘Choir organ’ was placed at floor level in the space occupied by the original Binns console. The action was electrified and a new 4 manual detached console was located on the south gallery opposite the organ.

More importantly, considerable changes were made to the voicing of the pipes towards what was perceived to be a more ‘continental’ sound, as was the trend during the 1960s. The specification now stood at 64 stops. The opening recital was given by the Italian concert organist Fernando Germani, organist of the Basilica of St. Peter in Rome. 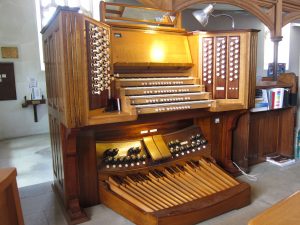 Following the fire of 1979 George Sixsmith & Son of Ashton under Lyme made further alteration and additions over the course of a number of years; the console returned to ground level standing on the south side of the chancel, and the specification rose to 83 stops. Unfortunately, this led to making access within the organ for tuning and maintenance difficult and to problems of instability of wind supply.

In 2008 the organ was restored by Principal Pipe Organs of York. The specification was reduced to 62 stops, new keyboards were provided together with a full ‘solid-state’ electrical control and transmission system. Efforts were made to return the sound nearer to that of the original 1913 instrument and to make the more recently added stops blend-in better. The opening recital was given by concert organist David Briggs formerly organist of Gloucester Cathedral.

The Society was founded in 1961 by Canon Alan Clark, Vicar of Clitheroe, and Charles Myers, organist, following the ambitious rebuilding and enlargement of the organ. The purpose of the Society was to promote a series of recitals which would help pay for the maintenance of the organ, and promote excellence in organ music-making by engaging organists of the first rank.
The Society held about 8 organ recitals each year, a format it maintained for 47 years running to approximately 350 recitals. Organists included those from most of the UK’s cathedrals, concert organists such as George Thalben-Ball and Gillian Weir, international organists such as Pierre Cochereau from Notre-Dame, Paris, and talented local organists.
The society was run by Charles Myers. The incumbent Vicar was the President of the Organ Society since it was a Parish Church organisation. After the death of Charles Myers in 1998 subsequent organists acted as the Society’s musical advisors.
Following the rebuild of the organ in 2008, the Society was renamed ‘Music at St. Mary’s’ with the intention of widening the scope of concerts to include more singers and other instrumentalists as well as the regular diet of organ recitals.