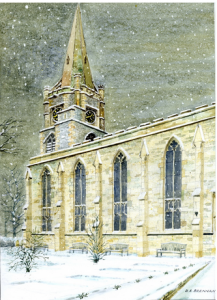 St Mary’s in the Snow by David Brennan

The History of Our Church

It’s possible there was a church here before Norman times, but the first definite reference to St Mary Magdalene’s Church is made in 1122. In the early fifteenth century, this building was pulled down and rebuilt, and the tower and the stonework of the East end remain from this rebuilding. In the seventeenth century, the church had three bells and a three-decker pulpit with an hourglass, a sounding board and six candlesticks.

As this church could only hold 500 people and the population by 1831 was 5000, a new church building was begun in 1828, designed by Rickman & Hutchinson of Birmingham, and consecrated in 1829. Initially, the church had only a square tower, but a spire was added in 1846. This eventually developed a lean, until in 1969 it was over a foot out of true, and the top 18 feet were taken down and rebuilt.

In 1979 there was a serious fire in the church and it was substantially rebuilt and re-hallowed by the Bishop of Blackburn in 1981.

The spire was in trouble again in 2010. Victorian iron cramps holding it together had rusted and expanded causing pieces of stone to crumble and fall off. The spire was taken down and completely rebuilt in 2012. 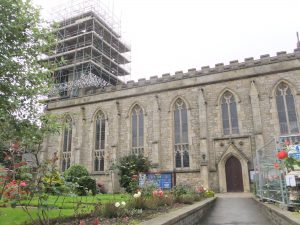 For more information about the history of the church, including the tale of the lady who complained that her pew had crumpled her crinoline and other quirky details, please see Rev Canon JC Hudson’s ‘History and Guidebook of the Parish Church’ available by the South door.