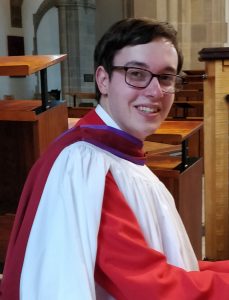 Brought up on the Fylde coast, Harvey began his musical studies at Rossall school, Fleetwood, Lancashire in 2011. He was awarded the music scholarship throughout his seven years at Rossall. Over his time at the school he has been apart of many choir tours including Westminster Abbey, York Minster, Dallas USA , Malta and in 2017 was the organist for the tour to Rome.

In 2016 he was granted a place at the Junior Royal Northern College of Music (JRNCM) to study organ and voice with organ tuition under Simon Mercer.

He is currently proud to hold the position of Harold Thornber Organ Scholar at Blackburn Cathedral whilst continuing his studies at JRNCM.

Harvey has been a student member of the Royal College of Organists for six years having the chance to play many of the Oxford and Cambridge college organs.

He is a prize winner of the prestigious Sir Thomas Beecham Award presented to him in recognition of his musical services to Rossall.

Harvey has also been awarded a diploma in Liturgical Organ Accompaniment from the North and Midlands School of Music and is a Licentiate of the Guild of Musicians and Singers and most recently a Fellow of the Fraternity of St Cecilia.

Harvey will read for a BMus degree in organ performance at the Royal Birmingham Conservatoire starting in September 2019.

It is Harvey’s overall ambition to pursue a career as a Cathedral musician.

I've been Director of Music here at St. Mary's for three years and am really enjoying the work. I've been playing the organ and working with choirs since I was 10. I love the Pendle area for walking, cycling and mountain biking.

← Organ Recital, Tuesday 4th June 1.00 pm by David Thornton A long walk for a great cause →