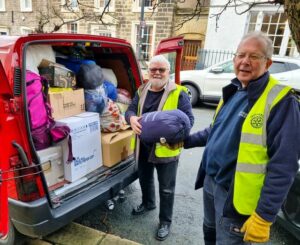 Rotarians loading a van loaned by a local business

In days gone by carts queued at the top of Church Brow to pay tolls to enter Clitheroe on market and fair days. With a twenty first century twist, cars queued at the same spot to unload goods destined for relief of those suffering because of the war in Ukraine. Clitheroe Rotary Club set up a collection hub in St. Mary’s Centre on four days during March and the amazing response was more than 15 tons of goods – clothing, bedding food, toiletries and many other items. As soon as donations arrived they were sorted and packed by an army of Rotarians and other volunteers including the Mayor and Mayoress of Clitheroe, Vicar Andy, both our churchwardens and many others. Churchwarden Howard Blackburn is also International Chairman of Clitheroe Rotary Club and was one of the prime movers in setting up the hub. 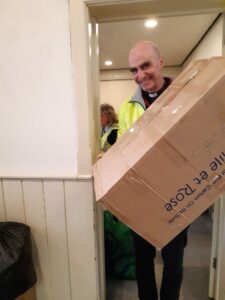 Vicar Andy Froud with a box of shoes

Once boxed or bagged up and labelled everything went to temporary storage from where it will be passed on to the International Aid Trust in Lostock Hall who have connections with eastern Europe and the capacity to deliver relief. 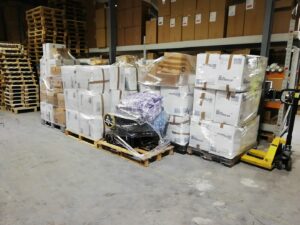 Across Lancashire the amazing response to the appeal for help has already filled the facility at International Aid. Clitheroe businesses and private individuals have lent warehouses and garages to store goods, carefully sorted and packed ready for onward transport once the backlog at the Trust has been cleared. Further collections will be made at the Hub once there is space to store the donations. 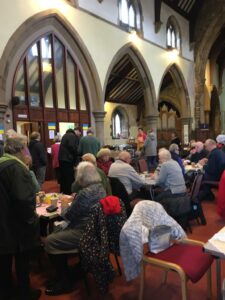 With nearly a dozen different soups to choose from diners at St. Paul’s Soup Lunch in March were spoilt for choice between tried and tested favourites such as broccoli and stilton and more adventurous recipes from Moroccan lentil to curried cauliflower. Soup came with a roll and butter and was followed by home made cake and a cup of tea or coffee, all in exchange for a donation. It was a social occasion with a purpose as members of St. Paul’s were joined by friends and neighbours and people from other churches in the Benefice to help the people of Ukraine.

To boost funds further Paul sold his magic numbers and there was a stall offering some of the gift items donated by Bashall Barn and shared by St. Mary’s. When all was counted over £1,000 had been raised which will go to Ukraine with the love and prayers of everyone who contributed.

← Looking out in Lent Lent Groups →