How many of you would like to University one day? Quite a few of you: if you want to go, I hope you get there. I went to university.

Yes it’s amazing isn’t it? It just shows any of you can do it. Here’s a picture of me all those years ago: I was lucky; in those days the government paid for me and many others to go. But it hasn’t always been like that and this morning I’m going to tell you a true story about a lady who never went to university herself. 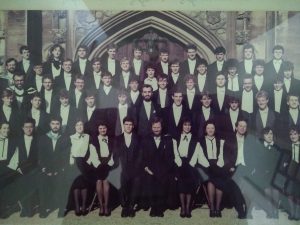 Oseola McCarty was born at the beginning of the last century in Mississippi and she spent her  life making other people look nice. Day after day, for most of her 87 years, she took in bundles of dirty clothes and made them clean and neat for parties she never attended and weddings to which she was never invited.

She never married, had children or learnt to drive. She visited the Niagara Falls once but found it “too noisy” and never went again.

According to neighbours she lived a very simple life and never even turned on her air conditioner except when the company came to service it. And week after week she worshipped at Friendship Baptist Church (which by the way is just about my favourite name for a church) 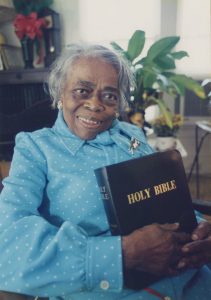 I know! It’s amazing to think that used to happen – that’s what we can history now and you can learn about it at university. But now that everyone was allowed not everyone could afford to go. She explained she wanted to give a scholarship so that young people with not a lot of money could go to university.

“But aren’t you the lady who does the laundry?” said the man in the office. “People who give scholarships are usually rich millionaires; it costs a lot of money to send someone to university.”

She had saved up all that money from the little that she had to give a really generous gift to a complete stranger.

Well it was enough and although she didn’t want her name put on the scholarship Miss McCarty did ask one thing: to be allowed to be in the hall when the first person received their certificate to say that they got the scholarship.

I’m telling you this story for two reasons: Miss McCarty thought ahead. She planned and she was patient. One of the most important lessons we all need to learn is that good things take time; we have to learn to be patient and take the long view. She was also generous: now sadly, generosity isn’t one of the British values the government says we should learn in school but I think it’s one of the most important values because I believe that God is generous and so we too should be generous.

Soon it will be Lent and I’m thinking about maybe giving something up that I enjoy and saving the money to give to the Children’s Society who help children who don’t have a lot of money or somewhere nice to live like I do. I hope you will think about that too but most importantly remember that I’ve told you a good story today about somebody who did something amazingly generous. Your challenge this week (and the staff can join in too) is to tell a good story: if someone does something generous or kind – tell someone else and spread the good news.

I know your teachers love to hear that kind of story.

Vicar of St Mary Magdalene for the last 10 years and Priest in Charge of Christ Church Chatburn and St Leonard Downham for the last 4 years. Ask me about running then run away